How Arduino digitalWrite Works – and why AVR is Faster

How Arduino Simplifies Digital I/O – and why AVR is Faster 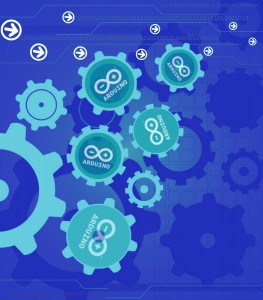 Have you ever wondered exactly what happens under the hood when you execute a digitalWrite() call on your Arduino UNO? This post gives you a quick look behind the scenes, and hints at why working directly with the bare-metal ATmega328 will be faster.

There’s a lot of talk about the overhead that the Arduino IDE adds to its projects in order to make the lives of the users easier – and the impact that the overhead can have on your projects. As you probably know, I ditched my Arduino UNO a number of years ago, choosing rather to work directly with the microcontroller – not in order to reduce the overhead, but for a number of other reasons that I’ll get into another time. Now that I’m happily working directly with the ATmega328, I thought it would be interesting to look behind the scenes and understand how the simplest of instructions – digitalWrite() – actually works.

Wrapping the AVR up

Essentially, all the Arduino UNO does is to wrap the ATMega328P up into a prettier package for you to use. Underneath the wrapping paper sits the same set of registers, the same basic program structures, and the same compilers. Not only does the wrapper provide a set of functions (eg. DigitalWrite()), but it also provides a slightly different program structure. All of this is implemented in a set of “include” files that are hidden away in the Arduino folder structures. The structure is fairly convoluted, but you’ll find the main include files at …/Arduino/hardware/arduino/avr/cores/arduino

Before we get onto the digitalWrite() function, let’s understand how the IDE hides all these wrapper functions away from you. When you compile a sketch, the IDE adds some extra code to your sketch before it actually does the compiling – among others it includes the arduino.h file and adds a main() function. The result of this is that the uniquely Arduino sketch (with a setup() and a loop()) is now turned into a “normal” C++ program. Take a look at the main.cpp file in the folder above, and you’ll see that it has the following:

This should look familiar to you – the setup() and loop() functions you created in a sketch are called from within the main() function, and their function prototypes are declared in the arduino.h file.

The Files that the IDE Includes

The “arduino.h” Include File

The arduino.h file drives the core of the Arduino IDE – it includes the definitions for such keywords such as “HIGH” and “LOW”, some macros (such as the min() and max() functions) as well as the function prototypes for many of the key built-in Arduino functions – including digitalWrite() and digitalRead(). So we’re getting slightly closer to our goal of seeing how the digital I/O is implemented behind the scenes. There’s another #include in this file that we’re interested in: #include "pins_arduino.h". We’ll look at this file next.

This file contains the mapping between the Arduino pins and the underlying microcontroller’s actual pins. As you know, microcontrollers’ pins are usually grouped into ports and pins. The ATmega328, for example, has 3 ports: PB, PC and PD. Within these ports, the individual pins are numbered from 0 to 7. The Arduino IDE hides this by simply referring to pins by whether they are digital (D) or analog(A), with a sequence of numbers within those categories. If you look in the pins_arduino.h file, you’ll note that there’s a useful diagram setting out the pin mappings: 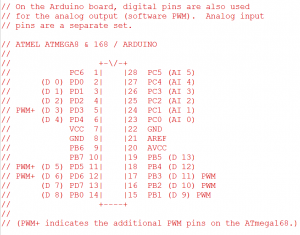 What Does This all Mean?

Essentially, by digging into the underlying Arduino libraries, we’ve proved what common sense has probably been telling us all along – that there’s no such thing as a free lunch. This applies the world over, and not only in the sphere of electronics – but it is perhaps easier to measure in our field. We’d naturally expect there to be trade-offs between ease-of-use and optimisation/efficiency; and we’d expect this to impact our projects both in terms of size and speed. Let’s assess what the impact is by using a very simple example – an LED blinking every second.

I created two programs: one in the Arduino IDE, and one in Atmel Studio. Both blinked an LED repeatedly at one second intervals – that was all:

After compiling them both, I looked at the size of the hex file that was generated. The Arduino-generated file (Blink.cpp.hex) was 2,918 bytes. The Atmel Studio file (blink.hex) was only 508 bytes – nearly six times smaller! Of course this difference is more noticeable with smaller projects, as the space that the libraries occupy is a fixed overhead – but it is an interesting indicator nonetheless. 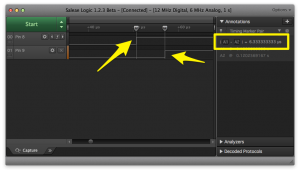 One of the blogs that I enjoy reading is that of the Baldengineer – I recommend that you pop over for a visit. James, the author of the blog, carried out a great experiment a while back – he timed how long it took to turn an LED on using the Arduino IDE and then using Atmel Studio. I’m sure that you’d expect the difference to be significant given the code that you’ve seen – accessing memory to obtain pin mappings, catering for possible MCU states, testing conditional statements. These all add up, and result in many more clock cycles than a simple direct port manipulation. James measured the digitalWrite() performance, and approximated it at 100 clock cycles – or more than 60 times slower that the direct port manipulation. Make sure you take a look at the detailed post – it’s interesting reading!

Hopefully this has given you a little more insight into the workings of the Arduino IDE – while not a perfect or comprehensive investigation, I think it illustrates the point pretty well. If you’re working with the Arduino IDE at present, you may at least understand a little of the trade-off that you’re making for the sake of ease-of-use – allowing you to decide which projects are best suited to Arduino and which are best suited to Atmel Studio. If you’re already working in Atmel Studio, and wondering what the benefits are to using cryptic coding over simpler function calls, then hopefully this has helped to reassure you. Either way, share your thoughts and experience in the comments below!

Thanks for the excellent tutorial.

― Gaz
Go Beyond the Arduino